Last weekend, the world lost two inspirational individuals. Both likely had no idea of each other’s existence, nor could they be considered inspirational for any parallel reason. One a politician, the other a musician. Yet each touched the lives of those with which they came into contact.

I met Gov. Booth Gardner on several occasions during my employment at Strategies 360. I found him to be an inspiration; he had a brilliant, charismatic demeanor despite having long suffered from Parkinson’s Disease.

Gardner was elected the 19th Governor of Washington in 1984 and held the office for two terms between 1985 and 1993. Prior to his Governorship, he served as Pierce County Executive, and after his term through 2008 – and likely well beyond – Gardner was active in some regard both in the local community and in the state government.

In 2009, The Last Campaign of Governor Booth Gardner, a short documentary film, was produced by Just Media and HBO, chronicling the Initiative 1000 campaign. The film was nominated for an Academy Award for Best Documentary Short.

In a letter to my old employer, Ron Dotzauer, the family spokesperson, I stated: I know he touched the lives of and inspired countless people, myself included. He will definitely be greatly missed by all who knew him and many who didn’t.

Rest in peace, good man. You were a true inspiration.

Watch this clip of The Last Campaign of Governor Booth Gardner:

The Last Campaign of Governor Booth Gardner clip from Just Media on Vimeo.

I caught a partial set by Jason Molina several years ago at Seattle’s Folklife festival. I can’t quite recall the year, not can I recall the name under which he performed. It could have been Jason Molina, Songs: Ohia, or even Magnolia Electric Co. What I remember of the performance is that out of his minimalist style, he was effortlessly enigmatic in the songs he created.

Somewhere between indie-folk and alt-country, Jason Molina’s music was without a doubt heartfelt and revealing, despite having a sound that was often difficult to describe. The first song I ever heard of his was the stripped-down opener and title track to Songs: Ohia’s 2002 LP, Didn’t It Rain.

Molina ultimately succumbed to health complications resulting from alcoholism. Despite his ailments, Molina was an artist whose music moved those who heard it. Loved by many throughout the indie music scene, he too will be a greatly missed soul.

Listen to “Heart My Heart” by Molina from his 2012 release Autumn Bird Songs: 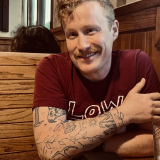